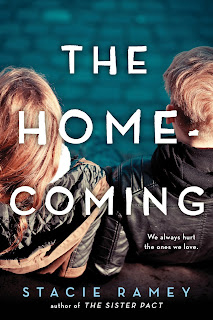 If you are wanting to read a book that is filled with some hard hitting topics you will be wanting to pick up The Homecoming.  It has quite a few - suicide, abuse, family issues, drugs...  Really, there is quite a bit.  And that all being said...there are definitely some trigger warnings for The Homecoming!

The Homecoming is about John.  And John is one really messed up teen.  He has been sent back to live with his mom and his two siblings after messing up big time and getting arrested for drugs while living with his dad and uncle.

But the drugs and alcohol issues aren't all there is to John.  First of all, he is haunted by the suicide of his girlfriend that happened a year before.  Second, he has issues with his parents, especially his mom.  And third, he has unresolved issues that sprung up around the accident that handicapped his older brother when he was around 7 or so years old.  His brother, who now seems to be hitting and fighting back more and more - which is another thing that doesn't sit well with John.

As you can tell, John has a lot of issues.

Really, sometimes this book felt like it had too many issues for just one solo novel to contain and deal with adequately.  And I don't think it necessarily did deal with them all fairly.  The novel reads very quickly and I only felt like it just barely brushed upon a lot of the problems that John has.  Almost as if it was trying to give him too many problems.  Fewer problems with a more in depth approach of examining them and fully exploring them would have been better in my opinion.  That, or making this a series and not so much of a stand alone story.

And I think that leads to my next issue.  I never really felt an in depth connection to John or any character really.  Everyone felt only surface deep.  There were so many problems going on with so many different people and I wanted to be able to feel them with them, but I just couldn't.  And then there were the side characters that didn't have much of a role at all...and they all felt the same.

And as for all the issues and problems John faced throughout this story, and he faced quite a few, I found myself having problems with his dependency of drugs and alcohol.  Every time something go tough all he wanted to do was smoke and drink.  It was all he could think of.  However, never did anyone outside of him mention anything about his problem.  Not his therapist, not his parents...NO ONE.  To me it screamed addict, but for whatever reason this was never ever brought up.  Almost as though it wasn't important.  And that really bothered me.

But all this being said, it isn't a bad story and it is a very decent read.  I enjoyed it well enough.  And like I said earlier, it is actually a pretty quick read.  I need to read The Sister Pact - the companion novel - to see how John is mentioned in that story and find out more about the suicide of his girlfriend.

This review is based on a copy provided by the publisher in exchange for a fair and honest review.  All thoughts and opinions are my own.
Posted by ReadingWithCupcakes at 5:00 AM