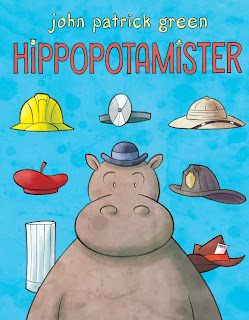 The zoo isn't what it used to be. It's run-down and falling apart. Hippo hardly ever gets any visitors. So he decides to set off for the outside with his friend Red Panda. To make it in the human world, Hippo will have to become a Hippopotamister: he'll have to act like a human, get a job, and wear a hat as a disguise. He's a good employee, whether he's a construction worker, a hair stylist, or a sous chef. But what he really needs is a job where he can be himself. 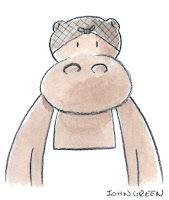 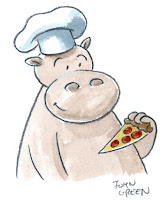 Err.  This review is going to be more of the spoilery kind.  I tend to do that with books for younger readers.  I hope you don't mind too much!

That being said though, all the mischief was really caused by the Red Panda and Hippo just accepted it.  And Hippo kind of let some of the blame be on him - despite that whatever he tried to do he was good at.  That is something I didn't like.

Now, I don't think Hippo should have been mean to Red Panda or anything, but I felt that it was all rather unfair to Hippo.  He was good at EVERYTHING, but they kept getting fired.  This was usually because Red Panda did something he shouldn't have.  Then Red Panda acted like it was the fault of both of them, but never something he did directly.

I don't know...call me a mom or something...but I didn't think that was very fair of Red Panda.

Other than that though, I found the story enjoyable over all.  And the artwork was cute!  I mean...just look at those Hippo illustrations!

This review is based on a copy provided by the publisher in exchange for a fair and honest review.

Amazon | Barnes & Noble | Goodreads
Posted by ReadingWithCupcakes at 5:00 AM