Behind the Blog: Harry Potter Love and The Wizarding World Premiere LootCrate

All of the other books in the series I have only read one time and for the most part it was when they came out.  So it has been a super long time since I have read them.

I am slowly rectifying this problem though, I promise!  I am currently doing my "rereads" on audio while I color.  Unfortunately there is this crazy long wait on each of the books on overdrive with the library I am going through, so I have to be patient.  I hate it, but oh my goodness are they worth the wait!

So why am I rambling on about this to you?  Well, when I saw that LootCrate was offering a Wizarding World themed crate that releases every other month, I knew I had to get it.  I ordered it as soon as I could after I heard they were released for orders.  And I didn't go for just one month with hopes it would be good....I put so much faith into this box that I did a year long subscription!

I know! I know!  I am crazy!  It could be horrible, it could be filled with crap I don't want, it could just be lame...  But I took the risk.

I knew it was also not going to be entirely of Harry Potter.  I knew it was going to have Fantastic Beasts in it.  A movie that was at the time not released yet, so we didn't know if it was going to be a major disappointing flop (I hear that it isn't!).  I know I personally am not going to get to see this movie for quite sometime since I have a toddler and no one to watch her (and I don't want to go alone either and leave her with my husband).

The sacrifices a parent has to make sometimes...

So let us get to the day the crate was getting delivered shall we?  I was refreshing my info on my USPS page waiting for it to tell me it was delivered.  When it finally turned green, I totally squealed in excitement.  I then texted my friend and bolted out the door to where our mailbox is located. 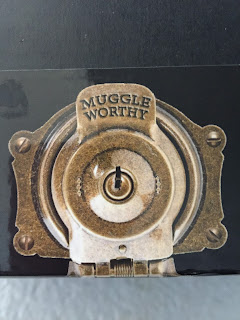 I opened the locker it was in and it was just so wonderful.  The box was larger than I thought it was going to be, and it was ever so nondescript.  A black box with few words and a sticker (I managed to get that sticker off and keep it btw). 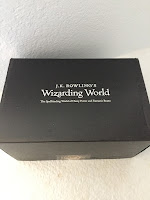 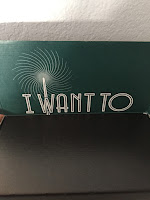 So I got it in my house found a nice location to open it and took photos of it every step of the way.  I wasn't quite sure what to expect when it came to houses.  I chose Ravenclaw and thought it might mean I will get some Ravenclaw specific stuff, but at least in this particular box that was not the case.

The only Ravenclaw specific thing in the box was the inside of the box.  I don't mind though.  It was awesome and I kept the top of the box... 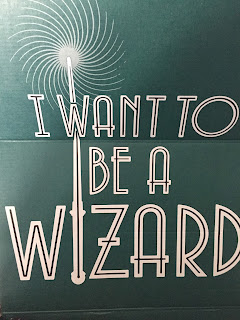 And then there were all of the goodies!  Oh my goodness!  I am not a huge Pop fan, but I the one I got was really awesome and I have no regrets about owning it.  The Pop figure we could have gotten was random out of 5 characters and all seemed like they would have been okay, but I definitely got the one I would have preferred off of the list.

And the owl!  I love the owl!  The whole time I was looking at Pigwidgeon my toddler was trying to take it from me.  It is soooooo soft!  I LOVE IT! 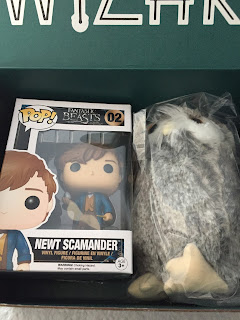 The key chain was also top notch.  It is actually a LootCrate exclusive! 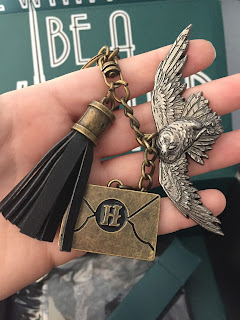 When it came to the shirt, I was expecting a "woman's" style shirt since we had the option of that when we ordered.  It ended up being a unisex shirt, but that is okay.  Thankfully I like those styles of shirts just fine.  And I like the design and that it is black.  So not disappointed there in the slightest.

The journal....oh the journal.  It took me a good look at it to realize that it was not actually for Harry Potter or for Fantastic Beasts.  I think that is what totally blew me away with the whole package.  It was something from outside of them but still in the world.  And it is NICE.  The pages are blank, no lines, dots, or grids giving me the freedom to do whatever I want with it.  However, I tend to have issues with using journals, especially when I think they are very very nice.  I just hate the idea that I might "waste" them... 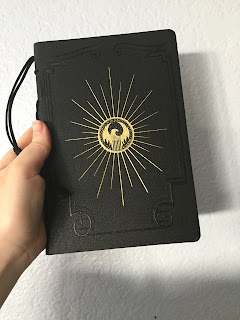 After all of this love though, you are probably wondering "was there anything she didn't like in this box?"  And the answer to that is yes.  I was not a fan of the little pin.  I just felt it was kind of blah and whatever.  I mean, the idea of it was cute...but totally not for me. 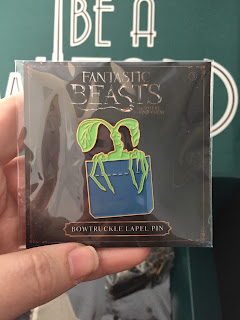 In the end, except for the shirt (since I will wear it) everything from the box pretty much got proudly added to my ever growing Harry Potter collection.  I cannot wait until January and the next crate!


I purchased the LootCrate on my own and with my own money.  All thoughts and opinions are my own.  LootCrate did not influence me in any way.
Posted by ReadingWithCupcakes at 12:44 PM