Wow! This book! I totally devoured it!

That it ended so quick actually saddens me.  I really enjoyed the world and the characters.  It was light hearted and really fun.

Super Freak is about Caroline.  She is the normal daughter of two Dryad parents.  And I mean normal.  She has absolutely no magic in her at all.  This is extremely rare as almost everyone has some sort of magic inside of them to some degree.  It has been that way ever since 1978 when Pandora's Box was found.  It turned out that Pandora's Box didn't hold what everyone though, it actually held all the worlds magic.

At the beginning of this story Caroline and her family are just moving to a new town.  Her father is a historian and they have moved around a lot.  However, if what her parents say is true, this will be the last time.  They move into a spectacularly spooky house with a lot of character that no one has lived in for a long time.  The town is very dense with supernatural and other paranormal creatures, giving Caroline very little hope that there will be many that are like her.  Or at least a few around that have very little magic.

On her first day of school, Caroline meets a couple of other kids.  Most notable there is Diana who is a Dhampir (half vampire half human) and two vampire twin boys: Kevin and Leo.  She also learns that her house is cursed and that no one lives there very long.  That they tend to disappear.

Caroline, being who she is, loves puzzles and mysteries and sets out to solve the riddle of the curse.  Everyone except for her friends is against her solving it, which only makes her want to find the answer more.

So as I said in the beginning, this book is fantastic.  I absolutely loved it.  The story just flew by!  I really enjoyed the mystery and the intrigue.  It was all very well done.

I also loved how the world was explained and how being a paranormal entity is the norm and being someone without any magic is actually what makes you weird and not fit in.  Very opposite of how stories are usually told.

I really can't say that there was anything that I didn't like about this book.  I highly recommend it!  It is a wonderful middle grade mystery! 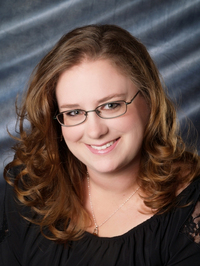 Vanessa Barger was born in West Virginia, and through several moves ended up spending the majority of her life in Virginia Beach, Virginia. She is a graduate of George Mason University and Old Dominion University, and has degrees in Graphic Design, a minor in Medieval and Renaissance Literature, and a Masters in Technology Education. She has had articles published in Altered Arts Magazine, has had some artwork displayed in galleries in Ohio and online, and currently teaches engineering, practical physics, drafting and other technological things to high school students in the Hampton Roads area of Virginia. She is a member of the SCBWI (Society of Children’s Book Writers and Illustrators), the Virginia Writer’s Club, and the Hampton Roads Writers. When not writing or teaching, she’s a bookaholic, movie fanatic, and loves to travel. She is married to a fabulous man, and has one cat, who believes Vanessa lives only to open cat food cans, and can often be found baking when she should be editing.

Don't forget to enter the giveaway!!!!!
a Rafflecopter giveaway

This review is based on a copy provided by Chapter by Chapter Blog Tours in exchange for an honest and fair review.